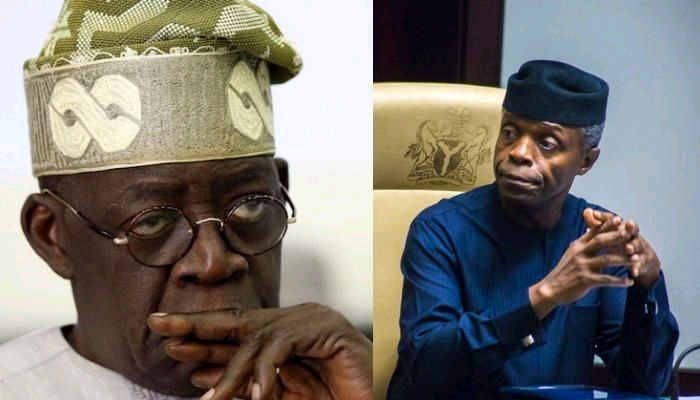 Shettima has argued that Tinubu does not deserve the kind of treatment he gets from Osinbajo.

The Arewa Youths Consultative Forum (AYCF) has alleged that the Vice President, Yemi Osinbajo, has some grievances against the presidential candidate of the All Progressives Congress (APC), Bola Ahmed Tinubu.

Speaking in a chat with our correspondent, the national president of the group, Alhaji Yerima Shettima, argued that Tinubu does not deserve the kind of treatment he gets from Osinbajo.

READ ALSO: Ex-MD of Alpha Beta Just Submitted a File to the EFCC On the Corrupt Practice of Tinubu—Daniel Bwala

He insisted that if Osinbajo is truly in support of Tinubu, he ought to openly show his support for him.

Shettima stated that Tinubu has paid his dues to President Muhammadu Buhari and Osinbajo and deserves better support from them.

According to him: “It’s very unfortunate that in recent times things have not been going well, however, Tinubu does not deserve what he’s getting from Osinbajo and Buhari; no matter how bad it is, he has paid his dues and has stood by them. He deserves better than the support they are giving to him.

“If they are truly with him, they should demonstrate it, and if they are not, then they should openly come out and say so. When Obasanjo was in power, in 2006, we could see his body language on how he worked day and night to stand by Yar’ Adua.

“This one that the president and the vice president are sitting on the fence, even the governors are not sincere.”

Speaking further, Shettima stated that APC governors are not sincere and urged Tinubu not to rely on them as they may disappoint him.

He asked Tinubu to liaise and discuss with Nigerians, CSOs, and organizations and not rely on governors.

He said: “Tinubu has less than five governors with him. The others are just supportive. The earlier he moves and changes strategy, the better for him, Kashim Shettima, and APC.”

Why We Endorsed Peter Obi for President — Obasanjo, Ortom