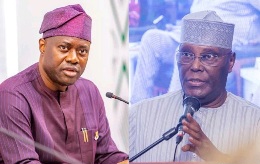 The party’s state chapter’s ongoing internal conflict has come to an end as a result of this outcome.

It was learned that all of the party’s candidates, at all levels, will be properly introduced at the event.

Especially in the area of tight adherence, Governor Makinde, the G-5 Forum’s young leader, has consistently stressed that the proper steps must be taken for the party to restore its rightful place at the national level.

His stance has led to factionalization of the state chapter of the party, as other chieftains of the party in their argument submitted that it is only the NEC of the party that has power to remove the national chairman, Iyorcha Ayu not Atiku.

However, with the present development, normalcy has returned to the party, as all the factions have agreed to put aside their differences and work for the common goals of the party at all levels.

8 PDP House of Assembly Candidates Defect To APC In Zamfara