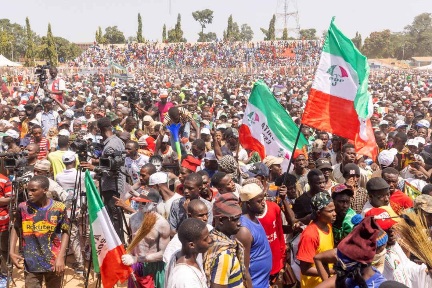 No fewer than 20,350 APC members have dumped Tinubu-Shettima in Bauchi State and defected to the PDP.

At least 20,350 members of the All Progressive Congress (APC) have dumped the party for the People’s Democratic Party (PDP) in Bauchi State.

The Special Assistant, Political Matters to Governor Bala Mohammed said this while receiving the decampees at an event held on Saturday in Bauchi.

According to him, the decampees are from the 20 local government areas of the state.

One of the decampees, Bala Zungur, said the development was informed by the feat achieved by the ruling PDP in the state, especially in the area of infrastructure development.

He said Bala Mohammed’s administration had constructed thousands of kilometres of urban and rural roads, schools, hospitals, and other viable projects designed to improve the lives of the people of the state.

He said the decampees comprised APC stakeholders and party leaders across the electoral wards, adding that they would support the PDP to enable it to consolidate on the gains recorded in the state.

Zungur urged the PDP leadership at the state and national levels to fully integrate them into the party with justice, equity, and fairness and pledged support for its candidates in the forthcoming general election.

“We left the APC because it failed to address numerous internal crises, which might result in electoral defeat in the 2023 general election.”

“The decampees in this place have worked and supported APC for eight years, but the party seems to be going astray without bearing, we finally returned to the PDP to move the state forward.

Meanwhile, he urged the governor and leadership of the party to protect the interests of the decampees.

Advertisements
Related Topics:
Up Next