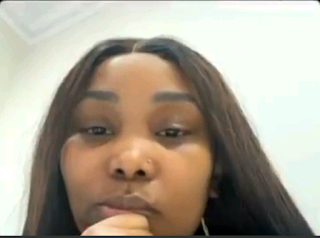 A beautiful lady has revealed the kind of relationship that she wants from a man, and she also disclosed some qualities of a good man personal to her.

Media personality, Ifedayo Olarinde, better known as Daddy Freeze, has shared a video of his interview with a Kenyan Lady, Wowza, on his verified Facebook page.

According to the video that was shared by Daddy Freeze, the Kenyan lady during the interview revealed the kind of relationship that she wants from a man and she also disclosed some qualities of a good man personal to her.

While speaking during the interview, Wowza said that she had always dreamt of having a man that beats her as her boyfriend because if a man doesn’t beat his girlfriend in a relationship, that means that man is not in control of the relationship. She further noted that if a man wants to show her that he truly loves her, the man must be ready to be able to beat her and show his toxicity. She said, “I want a man who will always beat me in our relationship because that shows he loves me.”

Continuing speaking, she added, “That is what I tell my friends I want from a man. If a man has not done such, I used to think he is not in control of the relationship. For a guy to show me he cares, he must be full of toxicity. I started wishing so because of the worst experiences I had with several men I met at an earlier stage in my life. I was always the one calling them and giving them what they needed, so if I meet any man today who intends to do these things, I always feel something is wrong.”

Nevertheless, the Daddy Freeze, in his own contribution, discouraged the Kenyan lady to stop having such a mentality because it’s totally wrong for a man to beat his girlfriend or wife.