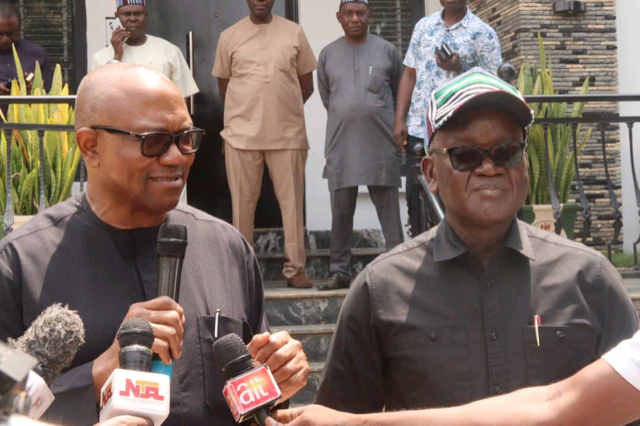 Benue Governor, Ortom has said that he preferred Peter Obi, despite being a PDP member and would have led his campaign.

Obasanjo justified his letter in which he threw his weight behind Obi, saying God would punish him if he failed to do the right thing.

On his part, Governor Ortom explained that although Obi, like most human beings, is not perfect, he possessed qualities of the kind of leader Nigeria needs at this point in her history.

READ ALSO: History is about to be created, it is impossible to rig this presidential election under my watch — Obasanjo declares

Only unpatriotic Nigerian will vote candidate with bad character —Obasanjo

Obasanjo spoke while featuring on an interactive session of the Experiential Leadership in Africa (TEL-Africa), held in Abeokuta, Ogun State.

The TEL-AFRICA global interactive session has as its theme ‘Executive Decisions, Indecisions, and Leadership Development in Africa.’

He, however, declared that only “unpatriotic and bad Nigerians” will vote for a candidate with bad character in the forthcoming general elections.

The former President, in his New Year message to Nigerians, entitled ‘My appeal to all Nigerians particularly young Nigerians,’ threw his support behind Obi.

The development, however, generated reactions from both the presidential candidate of Peoples Democratic Party, PDP, Atiku Abubakar and that of the All Progressives Congres, APC, Bola Tinubu.

While justifying his support for Obi, Obasanjo insisted that he did not use the word “endorse”, but he only gave his opinion on the candidates.

He said: “Whether the letter is open or not open, what I believe is that I will be punished by God if I know what is right and I did not put it where it should be.

“The word I used is that one particular candidate has an edge, taking everything together and I take character, I take track record, I take vision and I take what you see in this man as a child of God.

“I don’t know why people are. I have done this in the past before for President Buhari. I said President Buhari does not really understand economy and that is true and you have seen it. I wasn’t running him down, that is what he is and he himself will admit that.

“I said his (Buhari) understanding of foreign affairs is also very little because when he was Military Head of State, he said his frontline does not go beyond the borders of Nigeria, that is a pity.

“But what then do you have, I wrote a letter almost six and a half pages and then only one sentence.

“Why should you as a Nigerian vote for somebody that the character, the reputation, the life of which you do not want your own children to be?

It is either you are wicked, you are unpatriotic or you are really, really a bad citizen of this country and then if this is who you are, what do you want God to do with you and that is the way I see it.

“For the last three days, I have about 35 youths who I have been talking to and they all told me that education, security and corruption are what they are concerned about, the question is who then can do it?”

I prefer Obi, despite being PDP member — Ortom

On his part, Governor Ortom explained why he preferred Obi, saying he would have led the campaign if he was not a member of the PDP.

He also said the Dr Iyorchia Ayu-led national leadership of his party should have no one to blame but itself if reconciliation with the G-5 governors failed.

Ortom, in an interview, explained that although Obi, like most human beings, is not perfect, he possesses the qualities of the kind of leader Nigeria needs at this point in her history.

He particularly praised for President Olusegun Obasanjo for endorsing Peter Obi for the onerous task of providing leadership for Nigeria at this time.

Ortom said: “So, here is someone that is looking ahead and wants the best for our country, Nigeria. Today, he has recommended Peter Obi.

“Honestly, if I were not in PDP, I would have been the one at the forefront of carrying Peter Obi’s bag and campaigning for him because so far, he is the best material.

“He is what this country needs to get things right. Somebody with clean records. That is not to be questioned, though nobody is perfect. Nobody is God, no human being is God. But here is somebody who has distinguished himself.

“So, if I were to offer advice on the best material for president, I will tell you that it is Peter Obi. But it is Obasanjo, a great patriot.

“He made some mistakes, especially on the issue of third term that came, otherwise, nobody should contest the integrity and patriotism, forthrightness and also the zeal to see a greater Nigeria more than President Obasanjo.

I’m disappointed with some of my Southern colleagues

“So, you can see what is happening, my colleagues in the G-5, we are all PDP members, most of us are contesting the election, except our chairman, Governor Nyesom Wike. I’m the leader but we have a chairman who is not contesting election that is very passionate about the issues.

“But you see, I must say that I’m disappointed with some of PDP southern governors who chickened out, who sold out and chose to do something else.

In the APC, all the governors in the north, they have a majority. How many of us here in the north are PDP? We are just four – myself; Sokoto governor, Aminu Tambuwal; Bauchi governor, Bala Mohammed; and Darius Ishaku of Taraba.

“But you see APC, I must commend them for fighting for equity, fairness and justice because they considered that the presidency should go to the south.

“Because mind you, Nigeria is a country with multiple ethnic groups, multiple religion, and multiple sentiments, that at all times we must be sensitive to ensure twe harness and try to marry all these sentiments, so we live together. So, APC governors came and said look, this thing should go to the south.

“During the convention, there were aspirants from the north but even the northern delegates of the APC voted against them. We had said this thing should go to the south, this is how it should be.

“So, I’m really disappointed because for me, when the southern governors met and said look, we demand that presidency should go to us in the South, I came out the following day and added my voice and said yes, what they have said is true, let us do it. So, these are issues”.

On the crisis in his party, Ortom, who is one of the G-5 governors, said: “I think we (G-5 governors) are on course as far as I’m concerned. As faithful party men, we have given enough time (for reconciliation). And we are told that the failed leadership at the national level will take advantage of the opportunity we have given them to address those issues.

“There are many ways of addressing issues, even when you are not able to meet the demands of a group or individuals, you will find a way of meeting them.

“Where people decide to be arrogant, where they decide to be mischievous, and do things as if the other person does not exist and try to do something with impunity, as if they have won election, and they don’t need any other person, it becomes a problem.

“But election cannot be won when ballot is not cast. Because I know, as a veteran politician of over 40 years, most of these key actors you see today in politics, when it comes to the School of Politics, they are my subjects.

“You know, the good thing about someone like me is that I started from the grassroot and I built myself from that level and I have got to where I am today.

“So, arrogance, impunity, mischief, will not really help matters. One will expect that humility. It is said that you stoop to conquer, even if you want to make it. Above all, politics is a game of interests.”

He explained that contrary to speculations in some quarters, the G-5 governors were not at a loss as to their next move but noted that as loyal party men, they were leaving sufficient room for genuine reconciliation to save the party they had all worked so hard to build.