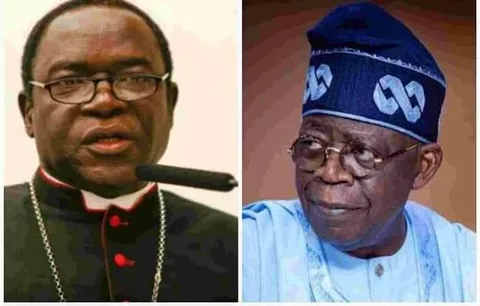 Tinubu was advised by Bishop Kukah that he should not be surprised if he is unsuccessful in his bid to become president in 2023.

Also Read Northern Elders blasts Kwankwaso, tell him to Step Down for…

Tinubu’s selection was criticised by Kukah, and Kukah, in turn, criticised the same faith ticket, calling it repugnant and unacceptable.

The Catholic Bishop insisted, while speaking with members of the media on Thursday, that the ticket was detrimental to the country’s efforts toward national integration.

According to Kukah, “But moving forward, the question I have asked my friends who are Muslims, particularly those who are from northern Nigeria, is a simple question: ‘Would Muslims in Nigeria or northern Nigeria be ready to make the same concession that Christians made in 1984 and 1993?'” Kukah said.

“As a person who professes to follow Christ, I find this to be completely abhorrent. It is not something that I am willing to accept, but that is the decision that has been made by the APC as a party. When the campaign begins, it’s possible that we’ll finally get to hear what people have to say.