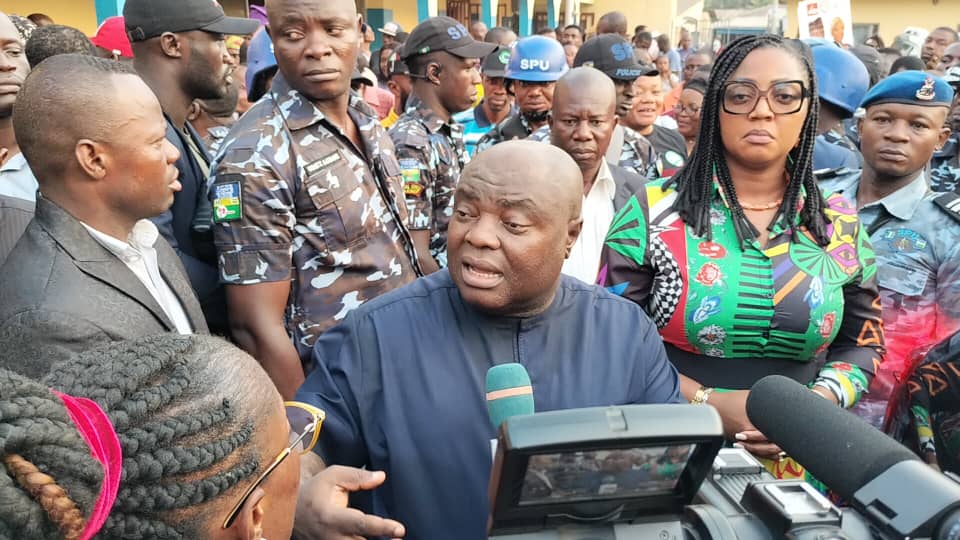 The traditional rulers council of Ogoja local government area have been told to invoke the gods of the land to Safeguard their votes from riggers and looters of election in the forthcoming general elections. especially the national, governorship and State assembly elections . The call has become necessary owing to the evil plan of the ruling APC party in the State to win at all cost inspite of the abysmal performance of the current APC government.

The charged was made by the PDP governorship candidate Senator Sandy Onor, when the campaign council met with the royal father’s of Ogoja to receive their blessings as they go about their electioneering campaign in northern Senatorial district.

Prince Abue, who spoke for men said that a house to house campaign should be done in other to ensure a smooth realization of victory and an organized system.

Barrister Bridget Aganyi, she thanked the incoming governor for honoring their request for a female deputy governor. she stressed that women should be remembered and recognized once she is elected into office.

Gospel Agom , the youths leader for Ogoja appealed for the recognition of the youths, he described how creative they are but have failed to express their good works because of the poverty rate in the area. He further appeal that scholarships and bursery should be given to them.

Dr. Ikanni Ewoga said that Cross River State is redundant in terms of progress and development, and something should be done to take the State back to the time when Donald Duke was in power.

Sen.Prof. Sandy Onoh thanked Ogoja leaders opinion and stakeholders for their support over the years, stressing the need for togetherness in this crucial moment in realization of their needs within the context of their request. He said Ogoja have been given an opportunity to produce a senator for the first time and should support their own Sen. Jarigbe Agom for a proper actualization of a true democracy. He further encouraged the people of Ogoja to be weary of false claims of empowerment from the governor Ayade.

Before the town hall meeting, the campaign council had met with the royal father’s and had a fruitful interaction. Alluding to the fact that everyone in Ogoja including the royal father’s are sympathetic with the People’s Democratic Party, because of the degrading manner they have been treated by the APC government in the State.

The governorship candidate of the PDP, Senator Sandy Onor told the royal father’s that the campaign team have come to receive the royal blessings on how to move the state forward from lies, darkness to truth and light respectively. He observed that they have not had such a full House of traditional rulers like this across the north since they started their interactions across the Northern Senatorial district.

Senator Sandy stated that chiefs knows where the criminals are, but you need to treat the traditional leaders well because if you treat them well, society would move on well. He told the royal father’s that time has changed. BIVAS are there to checkmate rigging. But the royal father’s should not even allow the opportunity for people to come and cause violence. He advised them to defend their own votes and community and use traditional means to deal with the people who goes against the land. If you keep quiet and refuse to do anything, who would rescue us.?

Senator Sandy stressed that all over the world, People are taking democracy very serious. So the royal father’s must take decision. Let us change and vote serious people. Ayade brought down Ogoja guest house and never rebuilt it. The guest House is a historical building that tells the story of Ogoja people. Chiefs should invoke the gods and possibly release bees to sting anybody who want to disrupt or rig election in Cross River.

Mr Donald Duke as former governor of the state asserted that the Traditional Rulers are here because they are worried about our state. If we do not leave our community better than we met it, then we have failed, he stated. He told the chiefs that he was in this project because they want to renovate the state. “We needs about 4 years to renovate before we administer the state, Putting Ayade at Gov House was a joke taken too far. He is an undertaker. He came to bury us. He is a confused person.”

Mr Duke went on to states that Ayade defection is a stolen mandate. Our judiciary needs to wake up. And we are here to correct the anomaly. So you vote for PDP. He described the Traditional Rulers as influencer and need to wake up and mobilize their subjects to vote for a purposeful govt.

The One described as the unconquered governor of the north, Senator Jarigbe Agom Jarigbe told the royal father’s that they have done their best, but they are not done with it. Ayade he stated was a mistake. We know your stipends are too poor. Your stipends put together cannot pay Ayade gateman. He announced that the royal father’s stipend shall be increase by 100% between now and when Sandy would be Governor.

In his response, HRM. Oti Mathias Odey Abua, represented by HRH Buturu Slyvanus Abua, Clan head of Ekumtak welcome the campaign council heartily, and express joy for the opportunity he had in past to work with these set of politicians referring to Mr Donald Duke. “We believe that Power comes from God. Victory is yours from what l have seen.We want a peacedul election without bitterness so that we can celebrate you all as winners.

I prefer Peter Obi, despite being PDP member, I would have led his campaign if..—Benue Governor Ortom

I Will Withdraw From Presidential Race If … — Peter Obi