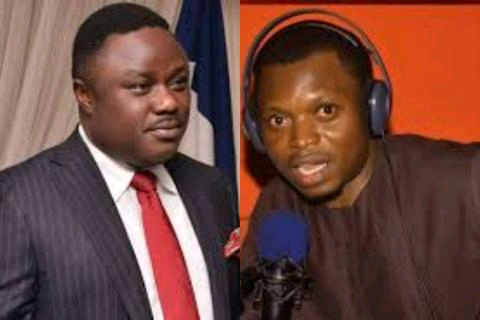 An investigative journalist and a Cross River State born activist, Agba Jalingo has challenged Governor Ben Ayade to go and campaign in the communities.

“With only 46 days to elections, Governor Ayade is either reluctant or afraid of going to campaign in the communities he wants votes from, to return to the Senate. Cross River Northern senatorial district, where he aspires to represent again has 51 political wards. Since the commencement of campaign activities officially, he has only been to his hometown, Kakum in Ipong Ward in Obudu LGA.

“Unless he doesn’t have money to fund his campaigns like it was the case in 2015, as revealed by his predecessor, Imoke, I am daring the governor to go to the other political wards to campaign. Not just for votes for himself but also for the APC Presidential Candidate, Tinubu, since he is the South South Coordinator of the Tinubu campaign.

“The governor has told aides repeatedly that he doesn’t need to campaign to win. He claims that his performance as governor will speak for him. But the question is what exactly has governor Ayade done? Each time I say it, I know some readers think I am exaggerating, but the truth is that, there is not a single project done by governor Ayade in Cross River that is functional, in all his eight years in office. That’s the truth, the whole truth and nothing but the truth. He announced on AriseTV the other day that the Obudu German Hospital and Airport will be ready by December. We are in January. He has 139 days to go.

“So now, he is rushing to copy his opponent at the elections. He is drilling boreholes after failing to provide portable water for his people. Even his own Obudu LGA had pipe borne water until Ayade came to uproot the water pipes that he wants to build a road. Now Obudu doesn’t have water. He is now buying solar powered lights for communities after all his much touted independent power projects failed to add anything to grid.

“He is now distributing 3 bags of rice and 100k to polling units for Christmas. He is launching all manner of employment and scholarship scams to hoodwink the naive. Let’s even assume that the purported hirings are real, what will his successor do with the additional wage bill? He is naming everyone appointee without job titles. And now I hear he wants to distribute Okada to the people. All in a final desperate bid to see how he can get another office to continue to hang around government resources.

“The actual situation is that the governor is afraid of going into the communities in the hinterlands to canvass for votes. He will be booed and pelted with missiles by angry citizens who hoped so much on him but ended up disappointed. He had gone round to campaign in previous elections and the reception was ecstatic. Then, people were in love with his bogus grammar and his ‘shoki’ dance steps. But not now again? All that now attract swears and curses from the same people that cheered him on.

“Consequently, the governor now wants to dash his way back to the Senate. In his transactional mindset, he believes that his impoverished constituents are so deprived that anything he throws at them will convince them to vote him. He belongs to the school that says when you dash the hungry people money, they will give you their votes. He is pursuing that method vigorously and it is left for the people to prove him wrong in 46 days time or reinforce failure for their own misery.