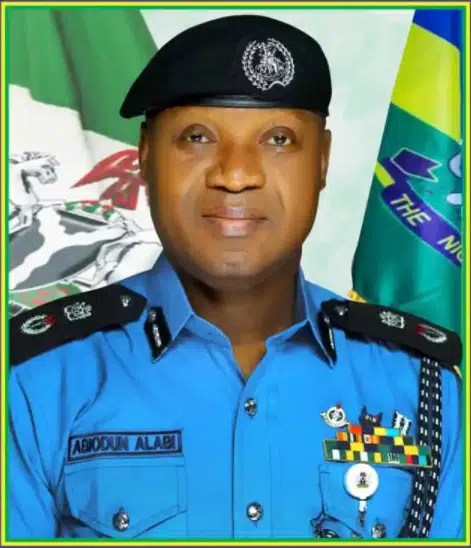 Abiodun Sylvester Alabi has been appointed as the new Lagos State Commissioner of Police.

Mr Alabi is the immediate past Commissioner of Police for Bauchi State, and has served as Squadron Commander, DPO, Lion Building, and Ikeja police stations for many years.

Sylvester Abiodun Alabi, a seasoned police officer with extensive experience policing both within and outside Nigeria, is from Ekiti State.

Mr Owoeye and Mrs Alice Alabi of blessed memory were his parents when he was born on December 31, 1964.

He was admitted to the University of Lagos in 1982 after completing his primary and secondary school education, where he studied sociology and earned a Bachelor of Science with Second Class Upper Degree.

His desire for a good education led him to enroll in the prestigious Obafemi Awolowo University in Ile-Ife, where he earned his master’s degree between 1988 and 1989.

On March 3, 1990, Sylvester Abiodun Alabi was enlisted as a Cadet Assistant Superintendent of Police in the Nigerian Police Force. Since then, he has served in various capacities in the Nigeria Police Force both inside and outside the country, most notably as a member of the United Nations Mission in Kosovo (UNMIK) in 2001. In August 2001, he was assigned to the elite Police Mobile Force as a Unit Commander.

He was appointed Squadron Commander of Police Mobile Force Squadron 43 Lagos (Diplomatic Protection Squadron) in April 2004, and is responsible for the security of all Embassies in Lagos.

He was promoted to Assistant Commissioner of Police in September 2013 and assigned to Force Headquarters Abuja as ACP Admin Police Mobile Force.

CP Abiodun was promoted to the rank of Commissioner of Police (CP) after completing his Higher Defence and Strategic Course at the National Defence College, and deployed to the Central Criminal Registry (CCR), Force CID Annex, Alagbon, Lagos, from where he was transferred to Bauchi State Command as the Commissioner of Police Bauchi.

He is a Fellow of the National Defence College (fdc) in Abuja and a member of the Nigeria Institute of Management (mnim).

Read Abiodun Sylvester Alabi’s Wikktimes interview from last year in which he explains himself.

Many people who know me know that I despise writing so-called “PR Articles” that pamper public officials. It’s even worse when it involves security agents, particularly armed security personnel like the police and the army—I’ve never written one.

But I’ve written a slew of articles mocking the cops, mostly because their behavior, particularly when it comes to dealing with civilians, isn’t always palatable.

For instance, in a previous article about the Bauchi State Police, I mentioned a report from December 12, 2019, in which a police officer in Ningi local government area allegedly shot one Sabo Idris, who was allegedly on his way to a mining field in Burra district.

At the time, the Bauchi State Police Commissioner was Mr Philip Maku. I recall a sour encounter with him at a press conference, during which we got into a heated debate over accountability.

I also commented in a widely circulated editorial for WkkiTimes in which a popular police officer, SP Baba Yola, was accused of “consistently torturing and extorting citizens” while enforcing the Okada and covid-19 protocols ban. The article prompted an immediate response from Bauchi State Governor Bala Mohammed, who summoned Baba Yola to the floor.

I also recall mentioning how a “enraged mob attacked and expelled the Dambam Divisional Police officers for allegedly ‘robbing commuters.'”

Also fresh in our minds is a report detailing how a township Divisional Police Officer allegedly tortured two people to death for “stealing chickens.”

However, CP Abiodun S. Alabi fdc, psc, mnim, the current number one police officer in Bauchi State, is in a completely different situation. I am convinced that CP Alabi’s achievements in Bauchi State must be documented, if only for posterity’s sake, because our system rarely rewards its best.

CP Alabi demonstrated uncommon leadership and maturity in a recent toxic encounter between the police and my good friend, Damina Yusuf (aka Nagari), who was severely brutalized by some notorious officers while doing his legitimate job. He not only summoned the notorious cops, but he also made sure they were held accountable for their actions.

Many may recall that shortly after Nagari was beaten and seriously injured by police, the Nigeria Union of Journalists, Bauchi State Council, pulled out its guns and began spewing a plume of fire—first by issuing a statement condemning the police, staging a boycott, and planning what would have been a catastrophic protest and vote of no confidence in the Bauchi police force.

However, CP Alabi, a skilled police officer, calmed the raging fire and the enraged pen-pushers who were ready to ‘trigger-happy’ their pens in order to damage the police’s reputation. He was well aware that the pen is more powerful than the sword. As an honest and knowledgeable police officer, he accepted responsibility for what had occurred, apologized on behalf of the command, and ensured that the perpetrators were held accountable—in order to serve as a deterrent to others.

The greatest disservice one can do to one’s pen is not to hail and commend CP Alabi’s honest and bold decision, because, as the saying goes, “reason begets honesty, and honesty, if given its head, begets confidence.”

Learning to accept responsibility is a leadership gift that God bestows on a select few leaders, of which CP Alabi is undoubtedly one. By taking that single action, he has healed the wounds and tactically de-escalated a long-standing schism between the police and the Bauchi NUJ.

CP Alabi has actively deployed a community engagement strategy more than any other Police Commissioner in recent memory, according to a deep dive into his strategy of combating crime and criminality in Bauchi State. He keeps in touch with local communities on a regular basis, especially those that are seen as hotspots or hideouts for criminals.

We’ve seen cases where the Communist Party strengthened its ties with traditional rulers, resulting in the arrest of more criminals suspected of committing various crimes. As a result of the recent influx of people from neighboring Yobe State, where remnants of Boko Haram still exist, the CP has adopted a community engagement strategy, which has helped to de-escalate tension in those communities, as I discovered.

I’m not sure how many years he has left in his police career, but one thing is certain: the number one police officer in Bauchi has a lot to teach the law-enforcement agency—from being smart to taking responsibility and making amends when necessary, as well as community engagement, which is regarded as one of the most effective crime-fighting strategies.

While we pray and hope for the best for CP Alabi, I believe the police authorities should implement some mechanisms to reward and punish the system’s best minds. This will motivate honest and open-minded people like CP Alabi to strive for greater success.