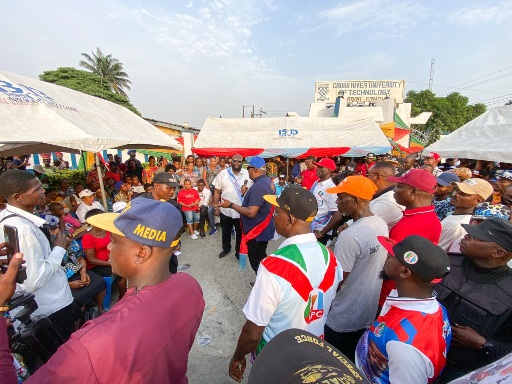 APC candidates in Calabar were on Friday bestowed with an award of honours.

The Cross River South All Progressive Congress (APC) Campaign Team for the forth coming general elections have “energised” the party’s candidates in Ward 12, Zone 3 in readiness to Vote APC from top to bottom .

The team led by the Senatorial Candidate, Asuquo Ekpenyong, performed the infusion of courage, boldness, and self-confidence into the electorates and grassroots leaders at a Ward Campaign Rally at Ekpo Abasi Calabar South Local Government Area.

Asuquo Ekpenyong charged party members at all levels as well as stakeholders in the Zone to work harder for the remaining task of winning the people’s votes.

He said: “We are determined to win this election. Our objective is to win this country, state, senatorial district, and federal constitution, and the two state constituents as victory doesn’t come easy; it comes with hard work.”

“We have physically and personally gone to all the nooks and crannies of the Southern Senatorial District in order to fully understand your needs, we will bring development in order to achieve economic sustainability for the people. You owe us only the responsibility of voting APC and staying back to protect your votes”.

The leader of Igbo Community, Dr Ugorji Nwabueze, called on the Igbo Community residing in the Zone to vote all APC candidates from top to bottom.